I had a business trip to University of Iowa last week and when I drove from the airport to the hotel I was enamored with the miles and miles of luscious green cornfields.  I was determined to take photographs of the cornfields while I was there.  Since sunset wasn’t until 8:45p, I took the opportunity to take a drive out in the country after dinner a few nights.  I had a vision to photograph the cornfields with the golden sunset light, an old red barn, distinctive rows of corn stalks and puffy clouds.  Well, nature didn’t come up with my order, but it did present some alternative opportunities.

I would drive out North of Iowa City after dinner scouting out locations.  First night was not successful in finding a location worthy of stopping.  The second night I came across the Sutliff Historic Bridge.  An old bridge that opened in 1898 to allow the farmers to cross the Cedar River to deliver their produce to Iowa City.  Originally, there was a ferry that crossed the river at this location and the story is told that a sandbar formed in the river preventing the ferry from crossing the river.  As a result this bridge was built.  It is now a walking bridge with a tavern on the East side.  There are picnic tables on the bridge for drinking and eating. 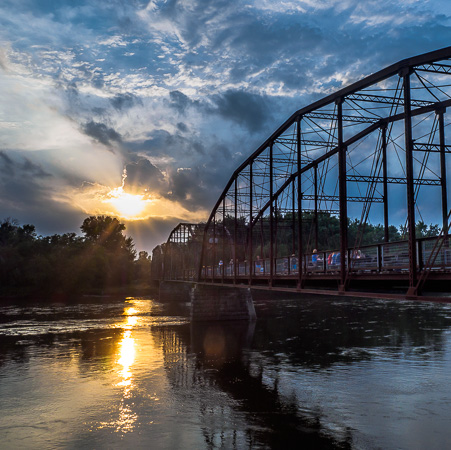 On the second night of driving I was not successful in finding a location that met my criteria for photographing.  As a result of being unfamiliar with the Iowa countryside, I almost didn’t go out the third night.  I decided to give it a try.  I did end up stopping at two locations North of Solon, IA.  The second location was my favorite and somewhat challenging.  I didn’t find distinctive rows of corn, but I did take photographs of a cornfield that was separated by a waterway.  These are planned grassy areas winding across fields to control erosion.  Otherwise, on a sloped field, the fields would wash downhill, losing precious soil. I did get a red barn, it wasn’t an old red barn, but a red barn nevertheless. 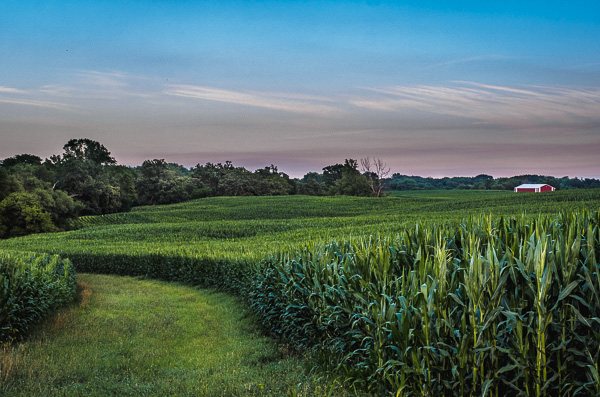 Off to the left of this photograph I attempted to take images showing the farm gate and fence along the edge of the cornfield with the parallel road to lead the eye into the distance.   This was my best attempt at it. 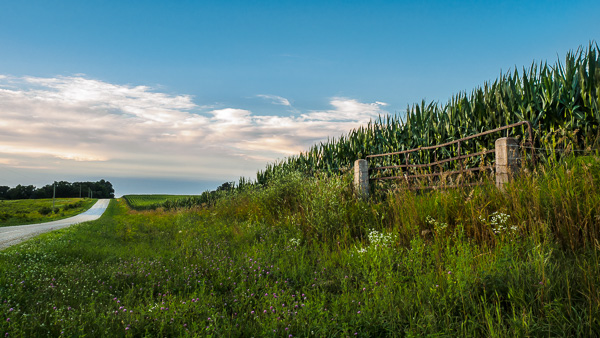 Finally, the Sunset was starting to get interesting, but the foreground wasn’t all that great.  I picked a spot across the road that had vines growing in the barb wire fence and used that for my lower foreground.  The Sun came out briefly and I was able to capture this image to wrap it up for the evening.  These three images were taken within a span of 20 minutes. 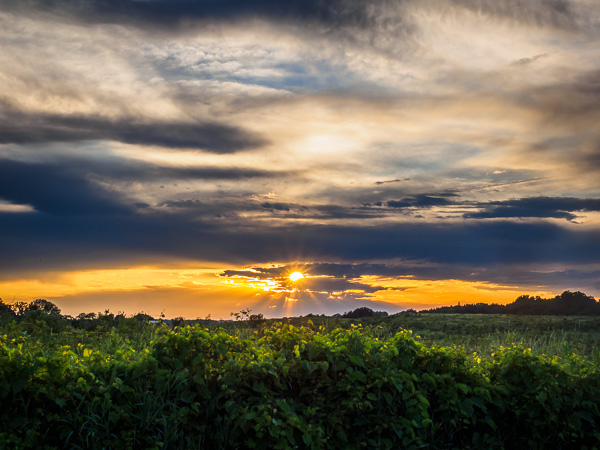 This entry was posted in Trip Report.